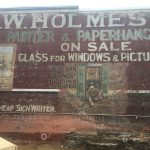 This amazing ghost sign has appeared in Malvern advertising L.W. Holmes hardware services. A mural dating from the late 1800's has been discovered in Malvern after a routine demolition revealed the piece of community history. On the newly exposed wall is an old advertisement for a hardware and services business, owned by Malvern’s first … END_OF_DOCUMENT_TOKEN_TO_BE_REPLACED

IN this extract of the book Signs of Australia: Vintage signs from the city to the outback, Brady Michaels and Dale Campisi explore the importance of Australia’s fading, ageing signs. SIGNS come … END_OF_DOCUMENT_TOKEN_TO_BE_REPLACED

The Currie and Richards Warehouse was erected in 1875 as a three storey brick workshop/warehouse for Alfred Shaw and Co., tinware manufacturers. The building features a stucco facade, and is … END_OF_DOCUMENT_TOKEN_TO_BE_REPLACED 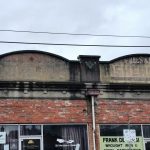 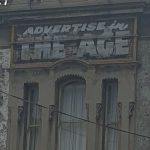 Almost every Australian has seen a ghost sign without knowing they are called Ghost Signs. Ghost Signs are the marvellous hand-painted signs we see on the sides of old brick walls.  The walls can be fences, the sides of buildings, above awnings and verandah's, almost any space considered to be prime 'advertising space'. Over the years, the vast majority of signs have vanished, either fading away with the weather, or when the buildings were demolished, but thankfully, some have survived the march of time.  In part, the survival has been due to luck.. a sign painted on the side of a building that then had another building built next to it and obscuring the sign.  Then many years later, the newer building is demolished to reveal the sign in all its glory to a … END_OF_DOCUMENT_TOKEN_TO_BE_REPLACED