You are here: Home / Articles / Brushing Up On Old Skills

This wonderful article by Carolyn Webb in TheAge tells us that handpainted signs and murals are not a thing of the past.

A fledgling advertising company is earning up to $200,000 a job by returning to old-fashioned handpainted outdoor murals.

In just two years, Apparition Media has landed clients of the calibre of Bonds, Coca-Cola and Heineken in an approach to billboards inspired by 19th century signwriting and 21st century street art.

The company, started in Fitzroy by three friends aged in their 20s, now employs 15 artists and is completing two to three murals a week in inner Melbourne and Sydney.

Co-founder and chief artist Hamish McBride, 29, says the advantage over pasted billboards is that passersby can watch the ads being created over a week. 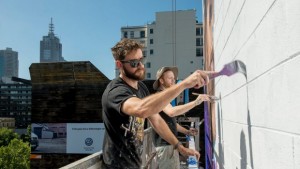 Members of the public take photos and spread the advertisers’ message for free across social media. The latest piece, commissioned by Paramount Pictures to advertise the comedy movie Zoolander 2, was one of Apparition Media’s biggest. The 13-metre portrait of actor Ben Stiller as supermodel Derek Zoolander stretches from the fifth to the eighth floor of a building in La Trobe Street, opposite Melbourne Central shopping centre.

Using computer and manual plotting, it took seven artists, including McBride, five days to paint, working from a swaying platform high above the street in storms and heat. Changes in colour and slogans are made once a week over five weeks.

Co-founder Tyson Hunter, who has worked in advertising sales, said he got the idea of using street art from a billboard for the Batman movie The Dark Knight Rises he saw on an old milk bar wall in Preston.

‘‘ I thought, ‘Imagine if it was hand-painted , how effective it would be to sort of having the image coming out of the wall’ .’’

After recruiting artist McBride, and another friend, archaeology consultant Tristan Minter, he discovered mural advertising was a trend in the United States.

Apparition Media has spread by word-of-mouth and will open a Sydney office this year. Its first client, in December 2014, was a big one: a 28-metre long hoarding for Coca Cola depicting new Coke cans, down the side of Knox Lane, which leads into Melbourne Central off Swanston Street.

It is now a Dulux ad featuring surfing and an Old English sheepdog .

McBride is proud of the team’s ambitious large-scale images such as a Day of the Dead skeleton fight for Espolon tequila, and clashing robots from the video game Halo 5 (client Xbox), which he had grown up playing.

On web, tablet and mobile

Go online to see a gallery of murals in Melbourne.