The great news is Pascale sent us a photo of the Lewis & Skinner ghost sign that popped up in Malvern a few weeks ago.

The bad news.. we ran an update of our gallery software and lost all our fabulous new enhancements that included location, maps, search etc.

Anyway, the picture can be seen in the gallery here. 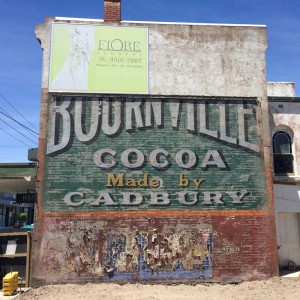 Located on the corner of High Street and Seymour Street Malvern, this is one of the finest examples of uncovered ghost signs you are ever likely to see.

A building most recently occupied by Bang & Olufsen has recently been demolished and exposed the wonderful sign.

According to Finding The Radio Book (below), there is also a number of bills posted below the main sign.

We suggest anyone wanting to see this marvellous sign, gets down there pretty soon because a new building will no doubt soon be hiding it for another 100

Here you can read a background of the sign, the signwriting company (Lewis & Skinner) and see some excellent photos of the sign.

Re: the bad news (above)

We’re delighted to say the gallery has been fixed.   The gallery was created using WordPress, NextGen (Gallery plugin) and a bespoke development that enables the wonderful Sign Information.

Our web team uninstalled the latest update of the NextGen software (v2.0.40) and re-installed the previous version (v1.9.13), and bingo.. it all works again.

Please don’t get us wrong about WordPress and NextGen.  Both are fabulous, and do everything we require.  It certainly looks like there has been a major upgrade to NextGen which has totally rendered previous versions and disabled enhancements and mods.

The past has come back to life.

This advertisement for Cadbury’s Cocoa is located on the corner of Seymour Ave and High Street in Armadale after a recent demolition of the corner site revealed this well preserved image.
Cadbury’s Bournville Cocoa was developed in 1906.

After relocating their factory from Birmingham to an area just south in 1878, George Cadbury named the area Bournville. His vision was for a greenfield area with running streams and clean air. ‘Bournville’ was chosen – combining the name of the stream with ‘ville’, the French word for town.

In 1866, Cadbury had developed their own pure cocoa (cocoa essence). It was England’s first unadulterated cocoa. As anyone would know cocoa essence has a very bitter and acidic taste. While complimentary to some recipes, is overpowering in others. In 1906 Cadbury at first had resisted developing their own milder alkalised version (a technique adding an alkalised agent like potassium carbonate) but eventually the company realised that alkalised cocoa was the future and created Bournville Cocoa.