JOHNSON CITY, TN – More than 125 years ago, Coca-Cola introduced its brand new refreshing and invigorating soft drink with painted advertising wall murals in towns and communities across the country, particularly in the rural South. Thousands of these iconic advertising murals remain, but many have become faded ‘ghost signs’.

On Thursday, Coca- Cola Bottling Co. Consolidated hosted a community event in Founders Park to celebrate the newly renovated historic Coca-Cola sign in downtown Johnson City at 126 Buffalo Street in Johnson City. Senior Vice President of Coca-Cola Consolidated Lauren Steele tells us how the process came about, “We have been re-vitalizing the Coca-Cola murals for the last three or four years and we’ve done, oh I think this is our 25th or 26th sign. In our new territory, here in JC, we asked our local folks here to find us some signs. So they discovered this sign here in downtown JC and another one around the corner that we hope to get to next year.”

Jack Fralin, the artist who restored the sign, sees these iconic refurbishments as a great opportunity. “I am always honored to be a part of these restorations,” Fralin says, “I am glad to help out the community in any way that I can.”

Steele talks about the widespread popularity of these “ghost signs”, “At one point, there were 16,000 Coca-Cola wall murals across the country, and unfortunately, over the years, a lot of those signs faded away and that’s where we come up with term “ghost signs”. So, at Coca-Cola Consolidated, this is part of our history, this is one of the best parts of our history, connections with small towns and rural America and some in big cities. What we like doing is partnering with cities to help them as they re-vitalize their downtowns.”

Guests to the event shared a catered lunch, an opportunity to personalize a mini-Coke can with their name on it at the “Share A Coke” kiosk and, of course, plenty of free Coke, Diet Coke and Coke Zero. 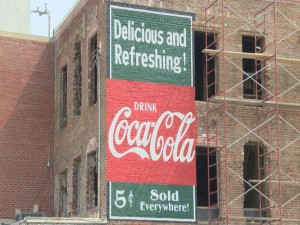