You are here: Home / News / Ghost signs of Ballarat

Fabulous article and pictures by Kara Irving in The Courier newspaper of Ballarat about local ghost signs. 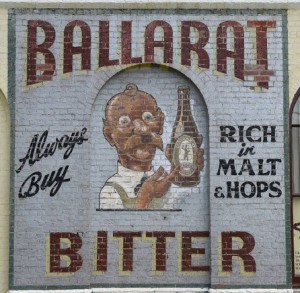 THE pale green and yellow markings of a hand painted Daytron Electronics sign still peeks above the brick-building tops on the Doveton Street North horizon.

After three decades of being exposed to Ballarat’s scorching summers and harsh winters, the business logo Phil Berry painted as an apprentice sign writer is still showing signs of life.

“Back then it was a bright yellow and three-type green sign for an electrical store,” Phil says.

“In those days we had two ladders and a plank in between them to paint.”

To learn more about Ballarat’s past, all you have to do is look up.

The term ghost sign refers to the faded remains of an advertisement that was hand painted onto the brickwork of buildings.

Phil says there are more than 100 oil-painted signs dating back to the late 1800s plastered across buildings in Ballarat’s city centre.

Some signs advertise beer or popular watering holes, while others are of soaps, petrol or businesses.

The giveaway Ballarat and Melbourne Bitter signs are easy to spot on Eyre Street and Creswick Road respectively, while the old Union Hotel sports a bright blue and white Carlton Draught sign.

And it is hard to miss the Irish Murphy’s toucan trumpeting a “Lovely day for a Guinness” while driving along Sturt Street.

More discreet ghost signs can be found tucked away in an alley or behind a business.

“There’s the F Flohn sign on the back of Fernwood Fitness… he was a sign writer,” Phil says.

“I noticed the other day there was a small one that resurfaced over the last couple of years at the Carriers’ Arms Hotel. It was shielded by a plaque and now (the plaque) has been removed.”

Certain ghost signs have been catapulted into this century after an old building was demolished and revealed a fresh sign plastered on the building next door.

“It had something to do with the kind of paint they used. It was oil based paint with linseed oil”

Ballarat Historical Society member Michael Cuttle says there are a mix of original and newly restored signs in town.

“The sign for G.A. Lemke & Co. Tent Makers on the Mitchell Harris Wine Bar building would be older, as Mr Lemke stopped trading about 1974,” he says.

“The sign for the Sun Plating Works on Mair Street has probably been restored since the business closed in 1953 or 54.”

“There is an assortment of signs on the old bluestone Pratt’s Warehouse building in Mair Street,” Mr Cuttle says.

“(They remained intact) because it had something to do with the kind of paint they used. It was oil based paint with linseed oil,” he says.

He said Ballarat had great foundations for ghost signs, namely because of its gold rush heritage.

“Most of the (older) buildings would have been built during the gold rush era,” Dr Schutt says.

“Everyone trying to advertise their business, would have in that time.”

“You also get a lot more of the (ghost) signs in poorer areas… because people did not maintain their properties as much,” he says.

Mr Cuttle says it is common for ghost signs to be removed by a single lick of paint.

“I think the attraction of these signs is their ephemeral nature, left unattended they will fade away over a few years, or a single coat of paint erases all evidence of the sign,” he says.

“The Ronaldson & Tippett name painted on the old factory wall in Lydiard Street was demolished in recent weeks.”

Mr Cuttle says recent works on the RACV building in Doveton Street North revealed the faint name of a business, after the old paint was removed from the façade.

So why are people still fascinated by a series of faded, brick wall messages?

Ghost Signs Australia website founder, who goes by the pseudonym of Federici, says the signs remind people of their childhood.

“Ghost signs are like the stuff you’d thrown away and wish you still had,” he says.

“It reminds a lot of people about their childhood and is a good way to remember the past.”

Melbourne-based Federici is at the helm of an online community of ghost sign hunters.

“We have 30 to 40 ghost sign hunters and it is a growing community,” he says.

“We are asking every day people to take photos (of ghost signs) and send them to us.”

Federici says in the United States there was a group of ghost sign hunters that took photos of the original sign and replicated the paintings in a new location.

“They would find the original paint and use that,” he says.

And after three decades in the sign writing business, he still has an eye, and passion, for painting.

“I could look at a sign (in Ballarat) and say Harvey painted that or Wayne painted that. Everyone had distinct nuances in their (sign writing) style,” he says.

“Back then it wasn’t a job. It was something that you really wanted to do.

“You become really passionate about it,” he says. 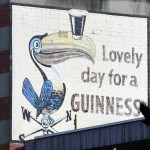 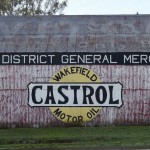 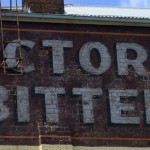 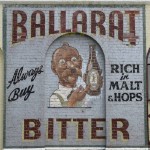