A fabulous set of signs has been uncovered in Maylands as reported by Emma Wynne on ABC Perth.

An advertisement for painter John E Mount (Painter) has uncovered he emigrated from England in 1911 and worked as a painter and decorator, living in Maylands. 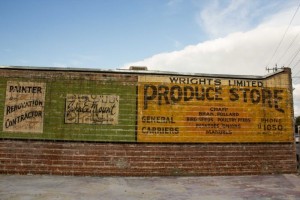 A small piece of Perth’s past has been temporarily unearthed on Maylands’ Guildford Road, after a developer demolished an old shop and found two well-preserved signs behind a brick wall.

A few weeks ago, developer Michiel De Ruyter pulled down a bicycle shop and discovered paintwork on the adjacent wall.

It has since aroused considerable local interest.

“We don’t know exactly how old it is,” he said.

“We have had a lot of people stop and take photographs, which is great.”

Mr De Ruyter has been able to discover quite a bit about the former businesses detailed in the paint — Wright’s Ltd and John E Mount, painter and decorator.

John Edward Mount was born in 1880 and immigrated to Perth with his wife and children in 1911. He set up as a painter and decorator and lived nearby in Eighth Avenue.

Wright’s Ltd emerged from FW Wright & Co, an agricultural machinery and produce business which was established by Frederick Wright.

Frederick Wright was the father of Peter Wright, who later partnered with Lang Hancock and the pair made a fortune after discovering vast reserves of iron ore in the Pilbara.

The slogan “you won a fiver” was intended to help customers remember the phone number of the shop — U1050.

Mr De Ruyter said he had not been able to discover exactly how the two businesses shared the same number. 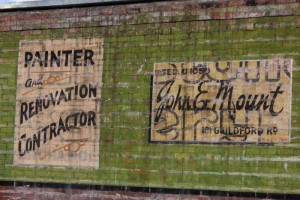 Many people have asked if the signs can be saved, but Mr De Ruyter has said the new development, a three-storey bar and cafe, plus the fact that the signs are now exposed to the weather, means they cannot be preserved.

“Unfortunately there is nothing we can do about preserving it,” he said

“It’s only a gift for a little while.”

The signs will be visible until at least April when building work will take over.

“What we have decided that it is not a heritage issue per se but it would be nice to treat it with respect.”

Mr De Ruyter has had high-definition photographs taken of the signs and said the pictures would be used in some way in the new building.

I grew up in Eighth Avenue Maylands, but I’m afraid I can’t remember Wrights Ltd, tho I think I remember a bike shop.
Garry