An ongoing debate around the world is how to protect and preserve ghost signs. Some want to repaint them, others encase them while others say to leave them alone.

We agree. While the debate cannot be treated as a one size fits all, each ghost sign should be treated with respect aimed at preserving its history and past, not simply painted over.

Having said that, there are other considerations.

Here is an example where a restoration has gone bad, well, in our opinion.

Then there is a wonderful example of a company recreating a ghost sign.

Here is an article about Port Adelaide Enfield considering repainting their ghost signs.

Warning on ghosts of the past

REPAINTING ‘ghost signs’ across the Port might give the area a “fake tourist village” look and take “some of the magic” out of old, faded signs, an academic says.

The Port has about 20 old ‘ghost signs’ including at the old Adelaide Milling Company at Hart’s Mill.

“There is a lot of debate about whether it is a good idea to repaint the signs,” Dr Schutt, of Melbourne’s Victoria University, said.

“Some people say there is some benefit in leaving them to fade away and that repainting them is an unnecessary intervention and it negatively impacts on their appeal. Part of the appeal is that they have survived against the odds for that long and they are a trace of a life that used to exist in the neighbourhood.”

Dr Schutt, who used to live in Adelaide, said a lot of ‘ghost signs’ in the Port have survived because the area was left alone.

“It can be very interesting for tourists but when you repaint them you can lose some of that magic and it becomes like a fake tourist village,” Dr Schutt said.

“I think the Port is a fantastic place because it has all of that still there and it’s actually quite appealing the way it is now already.”

Mr Johanson said he would still push ahead with the idea, despite Dr Schutt’s comments. “Some of the signs I know in the Port, you probably won’t see for a lot longer,” Mr Johanson said.

Renewal SA in June spent $3000 to repaint the sign atop the old Lion Flour Mill shed at Hart’s Mill.

Friday, August 21, 2015
A little ghost sign controversy
Yours truly weighs in this week on the issue of repainting signs with the mayor of Port Adelaide in the local paper….

What do you think?

This hand-painted sign in Morecambe, Lancashire, has been restored by two local artists 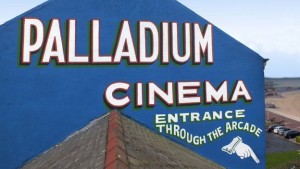