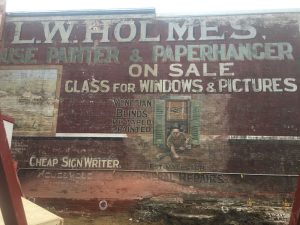 A mural dating from the late 1800’s has been discovered in Malvern after a routine demolition revealed the piece of community history.

On the newly exposed wall is an old advertisement for a hardware and services business, owned by Malvern’s first elected mayor, Louis William Holmes.

Local resident Jonathan Cooper kept a close eye on the site across from his house when he first noticed the interesting mural.

“I watched the wall coming down bit by bit over the next few days and then I realised just how old it really was,” he said.

“It’s been sparking a lot of interest in the community.”

The mural was hidden by a property that was backed up against it and has been well preserved as a result.

Even Holmes’ greatgrandson , Simon Holmes, had no idea it existed.

“We were dumbfounded that it was even there,” he said. “It’s a treasured piece of our family history but also the history of Malvern.”

Mr Holmes said he had spoken to council about requesting if the new building owners could keep it visible, but is not sure if that is a possibility.

“On the flip side, if it does get covered up again it might be preserved for another 100 years,” he said.

This article by CHRISTINA KARRAS is from the April 27, 2020 issue of The Herald Sun Digital Edition.
To subscribe, visit www.heraldsun.com.au.