This wonderful sign comes from Valerie of The Suit Hospital in Albert Park.

Ghost sign from the 1950s for The Suit Hospital Pty Ltd – offering invisible mending – and pictures of robots?! 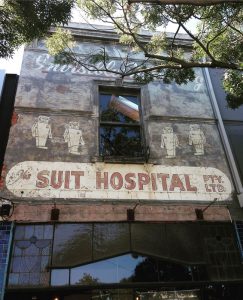 When researching The Suit Hospital sign I came across this excellent page which includes a number of ghost signs.

Written by Nick Gadd who has a keen interest in Melbourne and ghost signs.

Melbourne Circle featured in The Age and Sydney Morning Herald on 24 October 2015: ‘Ghost tour traces Melbourne’s mysteries via signs of another time’

He was a guest on Radio National on 21 February 2015, chatting with Michael Williams and Stephen Banham about ghostsigns. Article here, with link to audio: ‘Melbourne’s ghost sign hunters open windows to the past’.

He was a guest on the afternoon program with Sheridan Stewart on 774 ABC Melbourne on 10 July 2015. ‘Ghostsigns and derelict buildings reveal clues about Melbourne’s quirky past’