You are here: Home / Victoria / Our World Tuesday – Unwrapped

We found this excellent find by Stewart Monckton about a ghost sign in Surrey Hills.

The sign was on Union road between Croydon and Guilford roads (on the right hand side as you are facing the railway) Surrey Hills.  The sign is no longer visible – it was revealed when an old building was knocked down, exposing the wall which has the sign. The new building covered the sign when it was built. 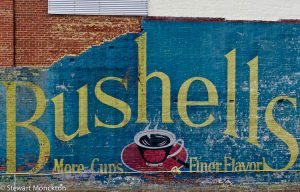 My wife told me about some old painted wall advertisements that had been revealed by the demolition of a shop in a nearby shopping strip.  So, I went off to have a look.

And they got me thinking – and I realised that these old paintings has just been unwrapped – like the presents many of us will be getting.  And really, what’s the best part of unwrapping a present?  It has to be finding something unexpected, but none the less interesting – just like these advertisements.

The real shame is that I think these paintings will be covered up again when the now empty building block is filled.

As I was walking back towards my car, I found this small street tree.  It was shedding it bark – as many Australian trees do in early summer.  And, once again, I though that this tree was being unwrapped to reveal the surprise inside.

I hope you have a great Christmas! Thank you to everybody who has visited, commented and encouraged me during 2012.

You can (probably) find more shots from around the world at Our World Tuesday.

Cheers and have a good one. SM

Our World Tuesday – Unwrapped.
I am a Birdwatcher, Biologist, Bushwalker, Booklover and Ex-pat from UK. 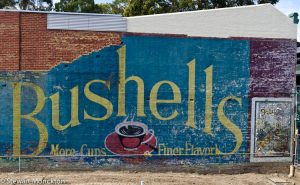