You are here: Home / News / Meet the ghost-sign hunters

Enthusiasts travel miles to photograph faded hand-painted adverts for products and businesses that no longer exist – symbols of defiance against the city’s relentless progress.

They’ve just knocked down an unremarkable little building on Latrobe Street, Melbourne, so they can throw up an apartment block – sorry, an “iconic 43-storey residential tower with a jewel box podium”. When the old building went down, it revealed the words “Paragon Printers” in fading paint on an adjacent brick wall. But not for long: the next time I passed, that wall had gone too, revealing another wall behind it, with a vibrant blue sign bearing the words “Henry Richardson, Saw Maker and Importer”. For a few days Richardson’s name was visible, as it had been 60 or so years earlier. Soon after, the site was nothing but rubble, and now that iconic tower is on its way.

A few years ago, a friend introduced me to “ghost signs” – old, faded, hand-painted signage for products and businesses that no longer exist. When I started looking, all over Melbourne and its and suburbs I noticed advertisements for forgotten products and businesses: Grey’s cigarettes, Ecks lemonade, Wertheim sewing machines, the Argus newspaper, Noon pies, the Melbourne Steamship Company, Guest’s biscuits and Preservene soap, as well as countless long-gone butchers, plumbers and dry cleaners.

Sometimes these anachronistic signs are intentionally preserved, but they usually survive through neglect, perhaps protected by buildings, billboards or trees. They may reappear briefly on a construction site, be visible for a matter of days, and then be obliterated.

I began to spend my weekends hunting for ghost signs on foot, peering into alleyways and wandering around warehouses, milk bars, old pubs and factories. I found myself asking: What were these products? Who painted these signs, and when? What do they tell us about the world we have lost, and the place we live today?

In a memorable phrase, the Californian writer Rebecca Solnit suggested: “Ruins are the unconscious of a city.” I think of ghost signs as fragmentary urban memories. A humble ghost sign can teach you something about a place’s history that a great public building cannot. It might tell you what time the pubs closed, or the price of a packet of cigarettes. You might find out the name of a forgotten racing paper, or learn that the way to clean clothes (according to the makers of Preservene soap, anyway) was “no toil, just boil!”

A fascination with ghost signs is cropping up all over the world. Photographs are collected and shared online by enthusiasts from Birmingham to Bombay. What is behind this passion? Why will rational people travel miles to photograph a faded Ovaltine sign, or excitedly tweet the reappearance of a Marmite advertisement?

Stefan Schutt, a ghost-sign fan, blogger and academic at Victoria University, believes that interest in local history, design, and the craft of hand-painted sign-writing all play a part. But he also argues that contemporary city dwellers are affected by a sense of loss. “My view is that urban areas and lifestyles are changing so quickly that people are keen to retain a sense of continuity and connection to the places they live,” Schutt says. He says this leads to “nostalgia for old brands and ways of living – the community shop where people used to meet, the pre-digital craft of signwriting.”

Ghost signs often hark back to a time before global brands dominated. Many ghostsigns are super-local. Ecks lemonade was a Melbourne brand, made and consumed locally, before it was swallowed by a larger company. Drinking Ecks made you a Melburnian in a way that drinking Coke never will.

“When I started out I was surprised by how many people could recall a ghost sign, either close to their home or work, or remembered from childhood,” says ghost-sign guru Sam Roberts, who operates ghost-sign tours and set up the History of Advertising Ghost Signs Archive. “People admire them as pieces of history, works of art, and fascinating evidence of skilled craftsmanship.”

Roberts’s enthusiasm for his all-time favourite ghost sign, Black Cat Cigarettes, fuses several elements: rich visual material, indications of social history, and local uniqueness. “Its scale and illustrated elements are unique for London, and it even features the name of the sign-writing company that produced it – Harris, “the Sign King,” he says. “It is on the former site of the Carreras tobacco factory in Clerkenwell, once home to London’s wider tobacco industry. The brand was named after the black cat that used to reside in Carreras’ West End cigar shop.”

Emma from Dublin ghost signs saw her first ghost sign not on a wall but online, on a popular Irish discussion forum. Then she went out hunting her own. “The photos increased my awareness of the signs around me as I walked the city streets. I would notice as old signs disappeared, and as ‘new’ ones reappeared. I felt that some of our windows to the past were simply being covered up or removed.” Like Emma, many ghost-sign hunters find that their hobby gives them a new awareness and appreciation of transformations in the urban landscape.

Frank Jump, the author of Fading Ads of New York City, has gathered a spectacular collection of ghost signs on his blog Fading Ad over many years. One of the finest is an elaborate sign advertising Rappoport’s music store, illustrated with a gramophone, which Jump says pinpoints the moment in time that appreciation of music shifted to the recorded performance.

Besides their social meanings, Jump regards ghost signs as symbols of survival against the odds, which have a powerful personal meaning. “Vintage advertising on brick face is hand-painted and never was intended to live so long. When I was diagnosed with HIV in 1984 and given just ‘a few good years left’ to live, I never expected to live so long either.”

Perhaps the ghost sign-hunting phenomenon is part of a broader desire to explore cities on foot, and uncover some of their secret, lost histories- like the urban explorers who roam derelict factories or penetrate into networks of drains. In a world where many cities feel increasingly the same, a ghost sign can offer a unique and particular experience of place.

For me, though, one of the most poignant aspects of ghost signs is that they never tell you everything. They are works of art whose creators are usually unknown. Sometimes illegible or obscured, they tease us with fragments of meaning. Even when the sign is clear, the story behind it is not, which opens up a space for the imagination. Ghost signs add mystery to cities, which might be the profoundest part of their appeal. 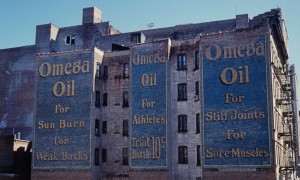 The Omega Oil sign in New York. Often these adverts are hidden for decades by buildings, billboards or trees – reappearing briefly during a construction project, before they are destroyed forever. Photograph: Frank Jump 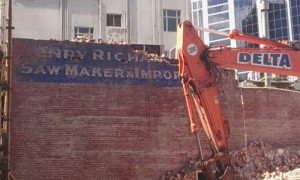 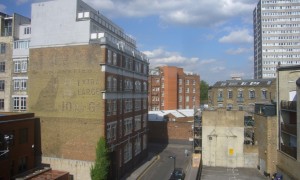 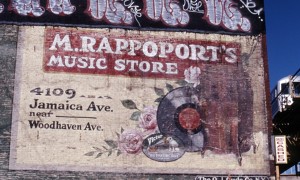